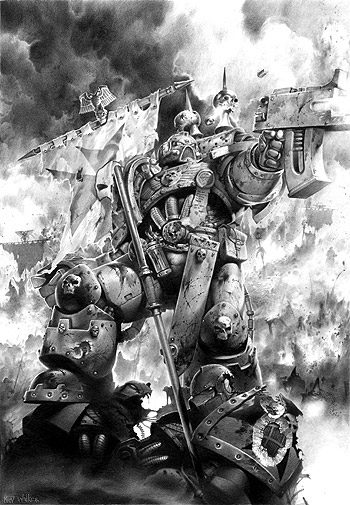 And they shall know no fear - God Emperor Heraclius XX

The most feared heavy infantry ever crafted in the history of Mankind, the Adeptus Astartes are a force to be reckoned with. Enhanced genetically, biologically, and cybernetically, these heavy infantry, often the product of years of training before being accepted into the order of battle, are among the deadliest troops in the galaxy. Employed in various roles, the Adeptus Astartes are versatile troops and can be used for a wide variety of action. The mere sight of such troops would raise the morale of Imperial troops, or demoralize enemy troops. They are well equipped with excellent weapons and powered armor, and also employ the best armored vehicles that the Imperium can afford and build.

Essentially human, Astartes are subject to heavy genetic modification, as well as organ implantation and cybernetics. These modifications grant them incredible speed, agility and dexterity. They are heavily indoctrinated to be loyal to the Imperium, and are fearless in battle. Astartes are also extremely intelligent, and analytical. However, only those gifted with the command skills to be a general rise to the title of captain. Captains command a company of 100 Astartes, while High Captains command 10 companies. The Chapter Master is the Strategos Primus' second in command of the Astartes Legion.

Of the 1million Adeptus Astartes, 100,000 of them are dedicated to serving the Inquisition in various forms, of which many are classified.

Utilizing the most advanced material science technologies in the Imperium, and equiped with advanced electronics/photonics and personal Void shield technology, the Astartes Tactical Powered Armor is the among the strongest kind of powered armor to be given to any mortal man. Not only are they resilient against many forms of attack, they grant the user a high degree of situational awareness. The MK XI Tactical Powered Armor is typically granted to the standard line Astartes, who are expected to perform a range of tasks. The Tactical Powered Armor can be outfitted with a jump pack to allow Astartes to jump and drop into the midst of the enemy and wield their melee weapons and their pistols at the stunned enemy.

The Terminator armor is granted to the most elite of the Astartes, and transforms each Astartes in a walking tank. Boasting armor and shielding far stronger than the Tactical Powered Armor, the Terminator armor can resist even a direct hit from a rail cannon of an Exarch tank. The armor also allows the carriage of tank grade weapons, from heavy plasma weapons, to tank busting gatling bolters. Alternatively, one could carry some of the heaviest power weapons available, strong enough to shatter tank armor.

The Astartes are essentially walking tanks, and their weapons are practically tank grade. From bolter railguns firing heavy shells, to plasma weapons, the Astartes is more than equiped to take on just about anything. Melee weapons such as the Power Blade and the Storm Hammer are extremely useful against enemy armor. These melee weapons are powered by a small fusion generator that powers a small rift generating device that warps space time around the weapon itself. The weapons also draws power conductively from the marine's gauntlet.

The Dreadnaught Armor is nearly equivalent to a Nihilus Superheavy Tank in terms of durability thanks to its advanced armor, despite its apparent lesser firepower. There can be no doubt that the Dreadnaught brings a form of special fire support to the Astartes. The Dreadnaught can either be manned by a commander, affording him with excellent command awareness thanks to excellent command and control links, or by an Astartes who has been previously critically injured, but fit enough to live in a life support unit in the Dreadnaught. The Dreadnaught Armor has two arms which can carry a heavy Force melee weapon, or large energy weapon. Missile Racks can be carried on its shoulders. Armor is in the form of neutronium layered armor, as well as heat dissipative armor. Multiple Void shields protect the armor from various attacks. Active defences such as mini-missiles can track and destroy incoming munitions. The suit is powered by a miniature Acretion Disk Fusion Generator, though rumors of a Warp core powered variant might be in the works. What is more interesting is that Dreadnaughts have jump packs and can land on the ground with a fair bit of force, stunning enemy troops as it moves to engage the enemy at close quarters. This ability to jump grants it excellent mobility and allows it cross large distances rather quickly.

The standard Astartes IFV, the Land Raider brings a formidable array of firepower to the battlefield. Its armor is modular, and its weapons can be customised prior to battle. It can carry a full squad of Terminators, or two squads of line Astartes. Weapons can range from heavy lance guns, plasma cannons, or cyclone boltguns (similar to the bolt gun point defence weapons).

Whereas the Imperial Guard mounts its mobile Void Shield projector on a Baneblade chassis, the Astartes mount theirs on a Nihilus chassis. These would operate as a network to provide theater protection against various munitions, such as Bragulan nuclear shells.

The Astartes require warships of a high grade to ensure that they are delivered to hot zones with their equipment. As such, they are allocated their own warships, though they typically operate in conjunction with Imperial Navy warships which provide the required escort. Astartes warships are typically designed in mind for orbital support for ground invasions, but they can more than hold their own in battles with other warships in space.

Standard Adeptus Astartes modular gunship. It can be configured to either carry 500 marines or to carry their equipment or to provide ground support or antistarfighter support.

The mighty Battle Barge is the ultimate symbol of the power of the Imperium. Powerful with few peers, the Battle Barges have been refitted and rebuilt repeatedly that their internal systems or superstructure no longer resemble their original specifications. Their reactors have been replaced, as have their engines and superstructure. They have been the Emperor's and the Strategos Primus' flagships for the last few centuries and their size and power still continue to awe. Now armed with the deadliest weapons in the Imperium's arsenal, the Warp lances, the Battle Barge can lay down a heavy barrage that would shatter lesser ships in a heart beat. As with all Imperial ships, they have redundant systems, and their power conduits have high power capacity which allow the ship to divert power to main weapons with ease. The arrival of such ships in any star system also strikes fear into the hearts of lesser beings, as the Battle Barge carries thousands of Adeptus Astartes, and these men will bring death to all who dare face them in battle.

The Battle Barges were constructed two decades before Imperium-Karlack war. During that war, the class more than proved its worth when its powerful guns sliced through swathes of Karlacks, took plenty of hits in the shields as well as armor, yet coming up on tops. Their meters thick neutronium alloy armor is extremely resilient against enemy attack, and layers of thick Void shields defend the craft from the strongest of attacks. The class has been given two rebuilds since, incorporating newer armor, and an improved superstructure. Newer weapons were added, including the Warp lance.

A strike cruiser's role is to be a command level expeditionary ship. These ships are to be the centerpieces of an Astartes strike force, when a Battle Barge is not present. They carry thousands of space marines, and are also equipped with the Scutum space defence system. Designed to give orbital support to ground operations, these ships carry large energy weapons, including one dual Warp gun turret, and also a battery of torpedoes to give them some additional capital ship punch. The bombardment cannon gives these ships stand off capability as well.

Something of a lesser Strike cruiser, and far cheaper, the Malchador class Destroyer started entering service in the recent decades to fulfill the need for a cheaper transport to ferry space marines to trouble spots. Carrying 10,000 Space Marines, these marines will allow the Imperium to quickly deploy space marines in a select trouble spot, to provide the needed additional punch to bring the enemy to heel.

The Trent class Frigate arose after the Imperium-Karlack wars because there simply too many Karlacks, but not enough guns to dish out the necessary punishment. The Trent class Frigate thus allows the Imperium to bring a ship into orbit with significant armament, and fast engines, such that the ship could deploy its weapons across a planet fast and quick, thus providing the necessary space ground support.

Retrieved from "https://worldsofsdn.fandom.com/wiki/Adeptus_Astartes?oldid=7125"
Community content is available under CC-BY-SA unless otherwise noted.