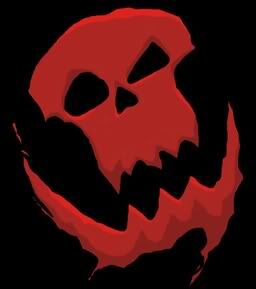 "It's not safe out here. It's wondrous, with treasures to satiate desires both subtle and gross; but it's not for the timid. And there are Orks everywhere" - Sir Lancey deCue, Gentleman Explorer

Orks are a puzzling race of greenskinned brute lunatics with guns. Big guns. And an almost suicidal taste for violent action, dangerously toxic beverages and immature behaviour, hence the puzzlement: It is a mystery how such a race could form a viable civilization.

In the larger scheme of things, Orks often fill the role of pirates, mercenaries, bar brawlers, biker gangs, sports hooligans, and, oddly enough, enterprising bartenders. This means that virtually every spacefaring civilization has met them, and is still debating wether they ought to be exterminated, uplifted, or used as guinea pigs. That Orks will gleefully agree to any of the options makes it even more awkward.

Grizzled veterans of the space lanes tell the story of how, when space explorers found the first hyperspace junction, there was an Ork Bar & Grill waiting for them. Many laugh at this preposterous theory and suggest that it most probably was an Ork Pirate vessel wich promptly fell on the explorers. Of course, everyone agrees that the only practical difference between the two is the Dress Code and Happy Hour specifics.

The origins of the Ork race, though, are unknown, even to the Ork themselves. Much speculation has been done on the subject, both by foreign historians, as well as Ork intellectuals (drunks), but such efforts are hindered by the lack of reliable records as well as a marked lack of interest on the part of the Orks themselves.

Historically, the greenskins have had unstable relationships with other civilizations. Their pirating, wanton destruction and recklessness is sometimes offset by their willingness to work for the highest bidder, as well as their ability to set up a bar in the most inhospitable locations. It is fairly common to have the greenskins involved in mercenary operations, privateering or smuggling, and although they are publicly condemned, most governments appreciate a bunch of lunatics with little regard for their own safety, not to mention confidentiality, due to how unrealiable Ork testimony is, even when sober.

As for their inner dealings, scholars scratch their collective heads at the perplexing evolution of Ork society: There is none. As far as anyone can tell, their society has remained the same for millenia, with the occasional massive civil war and rotation of leadership, but wich invariably returns to the status quo. Many theories have arised to explain this, yet the most obvious one is often disregarded for being ludicrous: The Orks appear to be happy as they are.

Community content is available under CC-BY-SA unless otherwise noted.
Advertisement